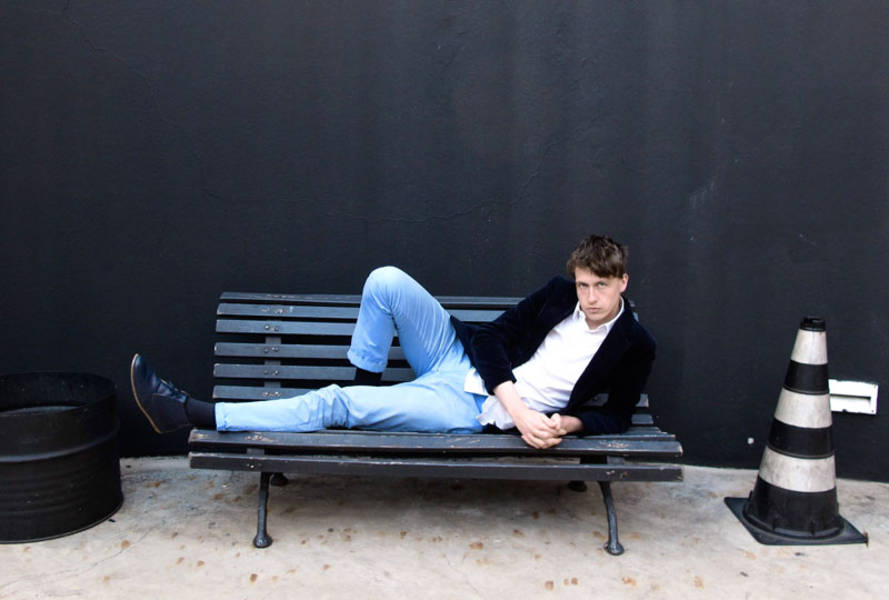 Yvan Rodic also known as Face Hunter was Born in Vevey, a French-speaking part of Switzerland. Rodic (1977-) studied Communication at Polycom Lausanne before taking on copy writing stints for Leo Burnett and Saatchi & Saatchi in Geneva, Brussels and Paris. A born trend-spotter with a natural eye for photography, it was not long before he combined writing for magazines with snapping pictures of people at art events in his then home, Paris. In February 2006, almost casually, he began posting the results online: and just like that, Face Hunter was born.

Widely considered one of the most influential movers and shakers in fashion, his original blog and more recent Visual Diary receive approximately 1 million hits per month. Over this short period, Yvan has been at the vanguard of one of the decade’s most remarkable trends. When he began in 2006, street style blogging was still in its infancy: in part it is thanks to his work that it has subsequently become a phenomenon. As one of those to experience first-hand the insatiable public appetite for a more democratic view on fashion, Yvan found himself caught up in a whirl within the first few months of his website’s inception. With the telling tag line: “Eye Candy for the Style Hungry” above portraits of individual characters with arresting styles, Face Hunter instantly developed a reputation for being one of the most satisfying style destinations online.

The travel invitations poured in and Yvan soon found himself hitting the road to capture new subjects—London, New York, Berlin, Stockholm, Geneva, Zurich, Copenhagen, Reykjavik, Oslo, Gdansk: the destinations were endless. In 2007, after three years in Paris, Yvan decided to take up shooting full time and decamped to London to facilitate his journeys.

After street blogging kicked off, fashion week in any given city soon seemed incomplete without Yvan’s portraits. In September 2006, GQ commissioned him to cover street style during the New York event for its online publication, Men.Style.com; The New York Times blog The Moment did likewise in September 2008.

More recently, in early 2010, he was commissioned by Vogue Italy to cover Milan and Paris fashion weeks for the new website vogue.it.More recently stepping outside the fashion world bubble and into the cinematic world, Yvan was asked to cover festivities and happenings at the world famous Sundance Film Festival for their eponymous Sundance Film Channel's Full Frontal Fashion magazine.

Success has meant frequent commissions from international brands and lectures at universities including The University of California Los Angeles (UCLA), Lacoste, Absolut Vodka, Beefeater 24, W Hotels, Canon, Volvo, American Apparel, Topshop, Shu Uemura, Nokia and Motorola with invitations to cover events in every corner of the world. Meanwhile, Yvan has to date contributed his own column to a number of global lifestyle publications: GQ (France), Tokion (Japan), Cover (Denmark) and Modette (Sweden). Since February 2010, he has been writing for prestigious UK publication The Observer and he continues to wade through an average of 10 to 15 interview requests per month. New York Magazine, The International Herald Tribune, Vogue, The Telegraph, The Independent, Libération, The Age and MTV are just some of the outfits who recognize that he is a key spokesman for a changing fashion moment.

In 2010 Yvan Rodic has been more in demand than ever, with the hallowed Arts’ publisher Thames & Hudson recognizing the increasing impact and prescience of his work. ‘Face hunter’—a collection of over 300 of his most striking images to date, together with his insightful observations—was published to popular and critical acclaim in March. The Times called it ‘Essential reading'.

More than just a street style photographer, Yvan Rodic is a cultural explorer or 'blog-trotter’—a new breed of traveller on a perpetual mission to scout out the latest global trends, current cultural happenings and fashion. His synoptic eye takes in the bright lights of capitals and the no-less curious glow of cities like Reykjavik and Jakarta in one fluid and continuous motion. Looking at the styles he captures en route, it seems as if national borders fall away – as if a new culture is rising up. Whether in Nizhny Novgorod or New York, this network of adherents take and re-work their references, subconsciously proclaiming membership of a new, ‘Creole’ culture. To capture these developments, Yvan has expanded his network to encompass new media while “twittering” the results as he goes. His tantalising Visual Diary offers a more intimate, eclectic record of his own tastes and the places and subjects he encounters, returning to the broader scope of his original passion.

Keen to bring to life the amazing personalities and subcultures he showcases in his individual portraits, he also produces and hosts The Facehunter Show, a web TV programme featuring emerging talents in the fields of music, art and (naturally) fashion.